New Delhi, May 29, 2017: To the delight of cricket enthusiasts on its platform, YuppTV, the world’s largest OTT player in South-Asian content, has bagged the exclusive digital rights for the upcoming ICC Champions Trophy 2017 for Canada and non-exclusive digital rights for Continental Europe. With the latest development, YuppTV users in Canada and Continental Europe, excluding Germany, Switzerland and Austria, will be able to catch the intense cricketing action LIVE on YuppTV. 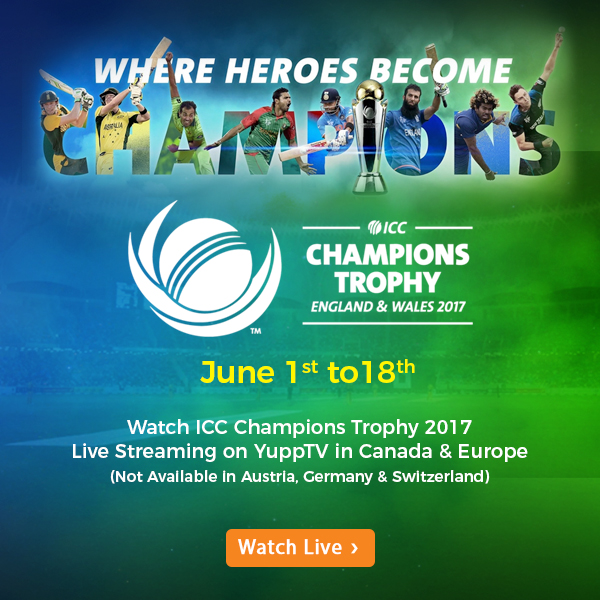 Commenting on the latest undertaking, Uday Reddy, Founder & CEO, YuppTV, said, “We are glad to bag the Digital Rights for the ICC Champions Trophy, 2017. It has been our constant endeavour to make it easier for users to access entertainment over the internet. Now, with the latest development, cricket enthusiasts will be able to catch the intense cricketing action LIVE on YuppTV. Since cricket enjoys a cult following across the globe, we look forward to receiving a positive response from our customers”.

The ICC Champions Trophy 2017 is going to witness eight top-ranking teams in the world to compete for the top spot. The 18 days long event is going to commence on June 1, promises to an action-packed cricketing extravaganza. YuppTV users can grab all the action, LIVE from 1st to 18th June 2017.

YuppTV is one of the world’s largest internet-based TV and On-demand service provider for South Asian content, offering more than 250+ TV channels, 5000+ Movies and 100+ TV Shows in 14 languages. YuppTV, recently received funding from Emerald Media, a Pan-Asian platform established by leading global investment firm KKR for investing in the media and entertainment sector, wherein Emerald Media acquired a significant minority stake in the company for US$50mn. Emerald Media is led by industry veterans Rajesh Kamat and Paul Aiello, supported by an experienced team of investment and operating executives. YuppTV had earlier raised its Series A round of funding from Poarch Creek Indian Tribe of Alabama.

YuppTV has 25000 hours of entertainment content catalogued in its library, while nearly 2500 hours of new on-demand content is added every day. YuppTV is currently ranked #1 Internet Pay TV platform for Indians living abroad. YuppTV is the most downloaded Indian SmartTV app and it also boasts of 8 million mobile downloads.