New Delhi, October 21, 2019: The global leader in South-Asian OTT content, YuppTV has announced its partnership with India’s oldest communication service provider, BSNL. The two category-leaders have entered into a triple play partnership for video and broadband technology services for mobile and fixed line. 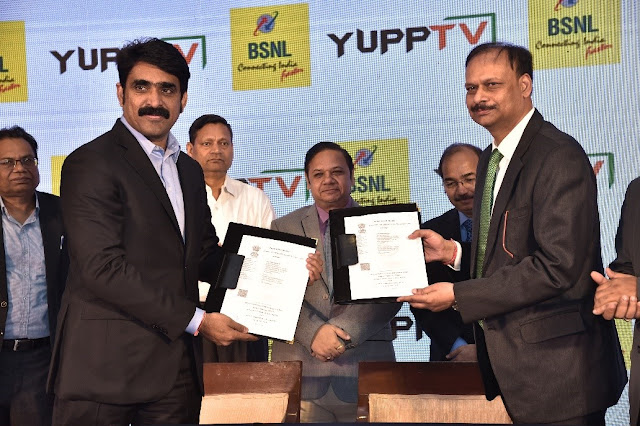 As the largest broadband provider in the country, the fiber network by BSNL has covered every nook and corner in the country and enjoys an equally fervent mobile base. It has the potential of providing Triple play services to any corner in the country, including India’s very hinterlands.On the other hand, YuppTV is a force to reckon in video and technology services, as a pioneer in the OTT space, YuppTV flaunts over 10 glorious years of expertise in streaming Live and VOD content to the wide-ranging audience across the globe with its innovative features. YuppTV’s in-house end-to-end technology is robust, reliable and scalable. Determined to bringing innovation in technology, YuppTV has been the first to launch various products and features such as Catch up TV, First day first show, App -in-app and video analytics, dongle, and Live broadcast.

YuppTV offers an extensive and exclusive content library with Live TV channels and catch-up, movies and exclusive originals. For YuppTV Originals, the brand has partnered with renowned names from the South Indian film fraternity and has been one of the firsts to produce the biggest hits of Web Series, down South. The brand also boasts of producing 13 Southern Original Shows, which is the highest in the industry. Riding back on tremendous success as one amongst the industry leaders, YuppTV also plans to soon announce something exciting in the content space for the Indian audience.

BSNL is counted amongst the only service provider making focused efforts and taking planned initiatives to bridge the rural-urban digital divide in the ICT sector. The coming together of the two industry-leaders will be another focused step in the same direction. With BSNL’s unrivaled pan-India reach, especially in the tier 2 & 3 markets and beyond and given YuppTV’s proven track record of superior and scalable technology along with extensive and exclusive content library, both the brands will together create an exemplary value proposition for India. As India’s Next Half Billion internet population is expected to rise from the hinterlands, the development holds further significance for consumers in India.

Commenting on the association, Mr Uday Reddy, Founder & CEO of YuppTV, said, “We are glad to join forces with an industry incumbent like BSNL. Following the association, we have an opportunity to leverage the vast network cultivated by BSNL and bring forth superior technology products and features to a burgeoning user base. AT YuppTV, we are determined to democratize access to cutting-edge entertainment solution through simple yet effective and innovative technology. We look forward to a long-term association and an affirmative response from BSNL’s extensive user base.”

Echoing a similar thought, Shri Pravin Kumar Purwar, CMD of BSNL added, “As a pioneer in the OTT space for 10 years, YuppTV has been quick to evolve with the changing times, leveraging disruptive technology for providing superior digital and video entertainment products and services such as Live streaming or catch-up TV or exclusive Originals. We are glad to associate with YuppTV to provide an impressive value proposition for consumers in India”.

Director CFA of BSNL Board, Sh. Vivek Banzal informed that technical setup has already been tested successfully to provide seamless triple play services on single fiber connection (Bharat Fiber) to its customers.The association is also set to help BSNL enhance its portfolio of services offers and stay competitive in a fast-evolving and cut-throat market. YuppTV will not only bundle its services for BSNL broadband and mobile customers but will also assist the brand in offering broadband services to the under served areas, by providing last-mile infrastructure.

YuppTV is one of the world’s largest internet-based TV and On-demand service provider for South Asian content, offering more than 250+ TV channels, 5000+ Movies and 100+ TV Shows in 14 languages. YuppTV, recently received funding from Emerald Media, a Pan-Asian platform established by leading global investment firm KKR for investing in the media and entertainment sector, wherein Emerald Media acquired a significant minority stake in the company for US$50mn. Emerald Media is led by industry veterans Rajesh Kamat and Paul Aiello, supported by an experienced team of investment and operating executives. The platform primarily focuses on providing growth capital to media, entertainment and digital media companies. YuppTV had earlier raised its Series A round of funding from Poarch Creek Indian Tribe of Alabama.

YuppTV has 25000 hours of entertainment content catalogued in its library, while nearly 2500 hours of new on-demand content is added to the YuppTV platform every day. YuppTV offers Live TV and Catch-Up TV technology. It also offers YuppFlix, a movie on demand streaming service for Expat Market and recently launched YuppTV Originals to bring forth unconventional story telling in collaboration with the top talent from the movie industry. Originals will be available in episodic format for the digital audience, exclusively on YuppTV’s platform. YuppTV is currently ranked #1 Internet Pay TV platform for Indians living abroad and the largest Internet TV platform from premium content availability in India. YuppTV is the most downloaded Indian SmartTV app and it also boasts of 13 million mobile downloads with 4.0 user rating.